Disclaimer: Not really a “glorious revival” of videolamer, but I’ve written this stuff on my own site and by gum this site deserves some activity.  Don’t worry, I’ll probably only update once or twice before the site goes back into hibernation.

Recently, I finally beat Suikoden Tactics, the Strategy RPG semi-sequel to Suikoden IV.  As a long-time fan of the series, I had intended to beat the game for some time, held off by two things.  First, Suikoden IV wasn’t very good and the story never resonated with me.  Second, Suikoden Tactics has the much-maligned feature of permanent death for non-story characters.  When combined with the grid elemental system and a massive set of things enemies can do, it’s extremely difficult at times to predict whether a character will die in any given situation.

Since I beat Suikoden IV for the second time just a few months ago, the time was right.  I didn’t start the game with much gusto, but at about the 15-hour mark (~25 hours total in the game), suddenly everything clicked and I finished Tactics in two days.  There were two successive epiphanies I had:

1: Suikoden Tactics is totally unlike any other Suikoden game in that it is about 5:1 game:exposition ratio.  If you play it hoping for more plot, expect to be disappointed.

2: Tactics has an arguably better implementation of many Suikoden mechanics than the core Suikoden games do, for three primary reasons: complexity, variety, and difficulty.

To expand on that second point, one thing I have always enjoyed about the entire Suikoden series is its underlying complexity.  III is a perfect example, perhaps a notorious one.  Your characters are split into three groups of two, of which only one can take a meaningful action each turn while the other will always auto-attack.  They’re ‘leashed’ to each other, and location matters.  Each character (of ~70 playable) has their own unique set of stats, including equipment restrictions and possibly in-built runes and available slots.  To top it all off, each character also has a set of passive skills they can master – each of which has its own leveling difficulty and mastery ceiling, and some are unique to particular sets of characters.  That’s something like 5 layers of complexity over the old-school Dragon Quest mechanics, and they will only ever matter if the player tries to win normally “unwinnable” fights for special rewards.
In Suikoden IV, then, Konami backpedaled a bunch and removed layers of complexity.  Four characters in combat, no silly groupings, no skills, and fewer runes/stats.  No “unwinnable” fights, save exactly one poorly placed treasure chest monster.  The game was pretty much bland combat with slightly-less-bland exposition, and was pretty much panned by disappointed fans. 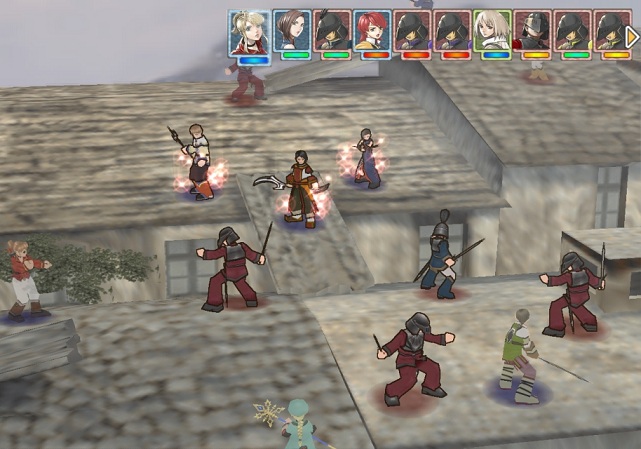 Suikoden Tactics was a cautious re-emergence of complexity in a better forum for that depth.  A challenging tactical RPG made the perfect backdrop: Innate elements with affinities for each character, a simplified skill system, a sidequest system similar to FF Tactics’, and so on.  Tactics incrementally adds complexity.  As characters gain their first interesting rune abilities, skills start to matter and a mount system is introduced.  Characters have affinities for each other and certain ones get position-based combos.  By the mid-point of the game, the sheer variety of mechanics finally starts to dawn on the player – brought in bit by bit, each one seems like an annoyance to track at first.  Here was my epiphany: with its set of dozens of recruitable characters, its variable rune system and sets of interlocking, stat-boosting equipment, Suikoden Tactics plays like an ultimate game of chess (or Fire Emblem, or Disgaea, if you will).  It even eliminates 90% of grinding by taking a stereotypically Suikoden approach to leveling: each map has an effective level cap determined by enemies’ level and a base “stage level”.  A very low-level character gains levels quickly, assuming survival throughout, and will match the rest of the party within a few maps.  Meanwhile, no character will become over-leveled, necessitating their inclusion in any particular combat.

At the same time, Tactics also adopts standard genre features.  Fire Emblem, for example, has characters that are ‘multipliers’ – they don’t do any direct damage, but boost nearby allies or cripple nearby enemies.  Tactics has the standard treasure hunter, medic, attack-booster, item-monger, and so on.  None are necessary, and in fact a party that included all of these characters would be utterly worthless in pretty much any battle.  But one or two included, or swapped in mid-combat, would be more powerful than just a party of warriors.

Suikoden Tactics is mechanically an interesting take on the genre and on the series, blending the two in a way that creates a fast-paced tactics game.  It doesn’t bog down nearly as often as Fire Emblem, with its 15+ character battles where half the time is spent moving your entire host of troops.  Nor does it require dozens of hours of grinding in item-worlds like Disgaea.
The fun part, though, is over: it’s time to talk about the less fun stuff. 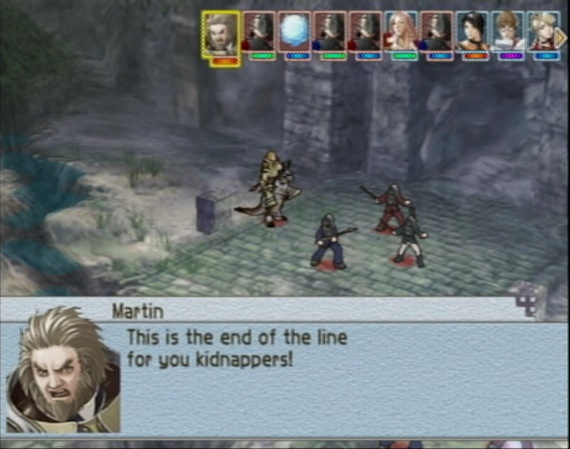 You would think that a series much-vaunted for its interesting and consistent atmosphere (if not great translations) would have another stellar plot, right?  Unfortunately, Tactics takes a substantial departure from the rest of the series by taking what should be an extremely personal journey for Kyril, and making it feel bland and like it doesn’t even matter.  In some games – strategy games in particular are bad about this – there is a scenario where a misunderstanding occurs, and you end up fighting the wrong people for a reason that’s totally irrelevant.  In Suikoden Tactics, this feels like it is happening about 90% of the time (probably only about 60%).  By the time your party ‘realizes’ who the enemy is, you’re so tired of the dim-witted repartee of everyone involved that it feels empty.

For a perfect example, I have a few spoilers in this next part.  They only spoil the first two hours of the game (and to a lesser extent the premise of the rest).  The main character, Kyril, is traveling with his father Walter in the Island Nations.  His father is investigating Rune Cannons, an especially powerful weapon that emerged roughly 10-15 years ago still isolated to the region.  As they reach their goal, and come across (incidentally) the Rune of Punishment, the True Rune and focus of Suikoden IV’s plot, Walter is inadvertently turned into a monster by a faulty Rune Cannon and his right-hand man is forced to slay him before what-was-Walter kills his son.  Even typing this, I can’t imagine how you could possibly make the game feel impersonal.  It seems like a perfect premise for the beginning of Kyril’s personal journey three years later to discover what happened.  Well, I’ll spoil this much: you learn nothing at all about why this happened or what rune cannons are for about 20 hours.  You get baited around with small bits and pieces of plot.  Here, I’ll even outline them and at what point you find out:

There is an optional sidequest that you can do for a little more exposition about Rune Cannons right before the end of the game.

Although in name you are investigating Rune Cannons, in fact you end up fighting in a proxy war between various factions of an empire with so little exposition it feels faceless.  In the end, Tactics fails plot-wise even at what its most ardent fans claim – that its additional exposition to Suikoden IV is worthwhile or even interesting.  There is absolutely nothing new there, aside from some name-dropping of the Scarlet Moon Empire.  The ‘alternate effect’ of Rune Cannons had absolutely no mention in Tactics’ predecessor and is almost certainly just ret-conned, and Kooluk is an utterly bland, lifeless country.
All in all, though, I’d still say Suikoden Tactics is worth a run-through.  Just don’t expect to get much of interest plot-wise, and simply enjoy delving the depths of its combat system.

Ahh, I should really pick this game up. I’m Suikoden starved.